I was at Costco and wanted a big hunk of beef but didn’t feel  like paying the outrageous prices they are asking for steaks these days.  Instead, I went with a value based option and bought the eye of round roast for just over $5 per pound.

An eye of round roast is an affordable, lean cut of beef that can be delicious when prepared correctly.

Stick with me and we will cover: 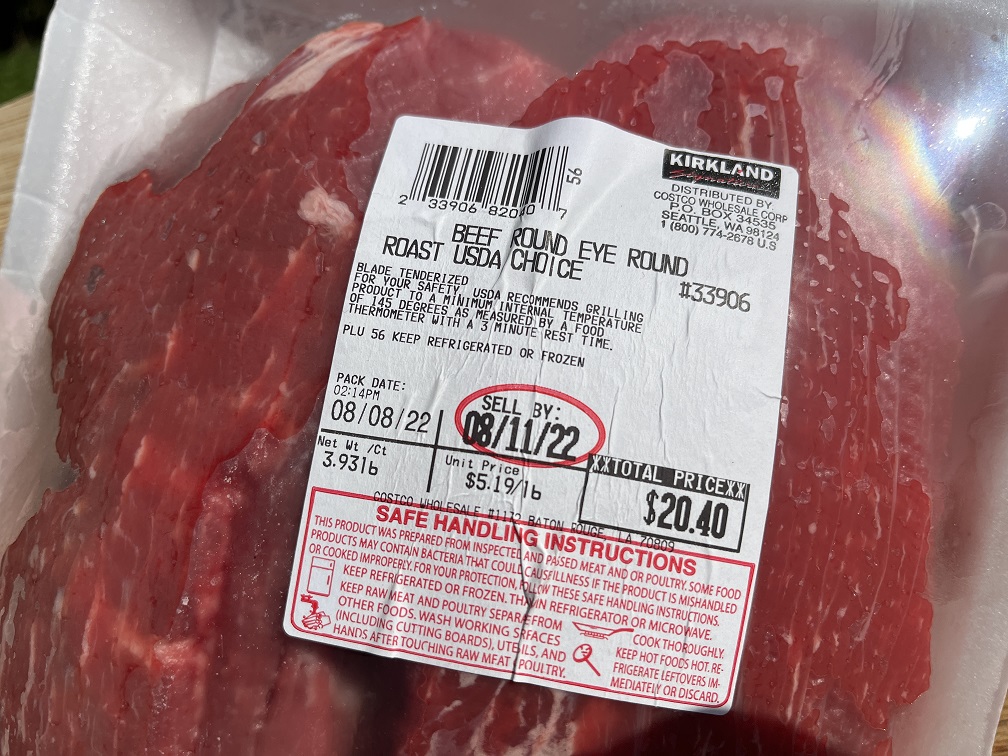 What is an Eye of Round Roast

The eye of round roast comes from the “rump” of the cow and is a long, straight muscle group.  The roast can easily weight up to seven pounds but most butchers will cut it into sections for more manageable cooking sizes.  The package I got from Costco had two sections of roast that each weighed just under two pounds.

The roast has a fat cap but the meat itself is inherently lean.  I prefer to take the fat cap off as that also removes the chewy silverskin.  The eye is lean enough that it is often used to make beef jerky.

The eye is a “working muscle” which means that it is full of beefy flavor but also pretty tough. 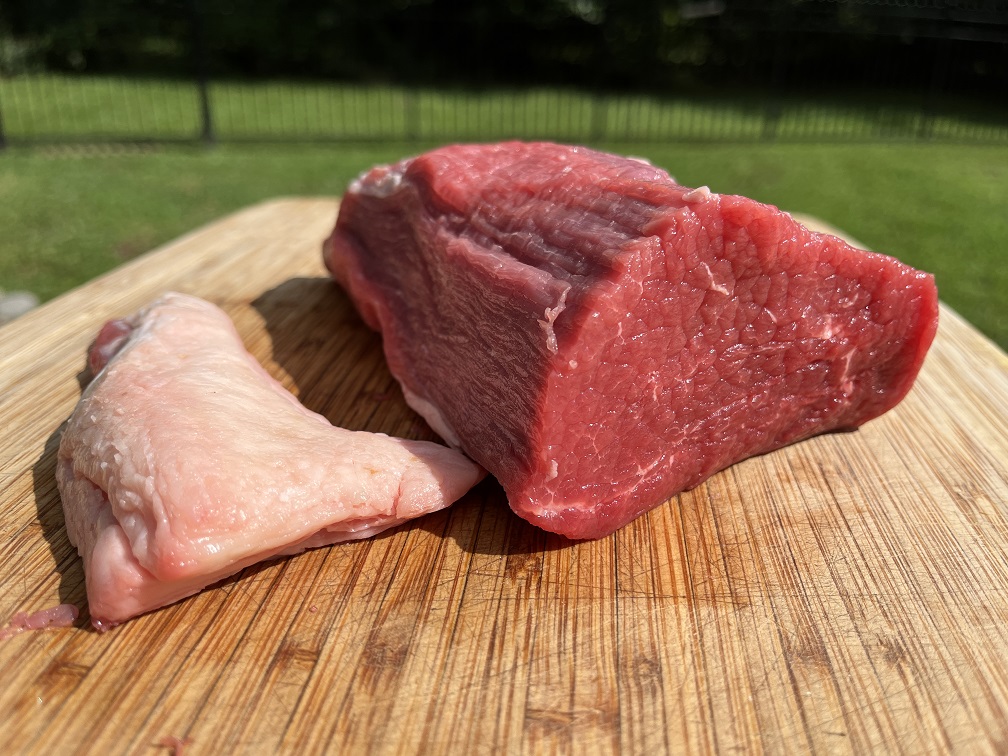 How to Make an Eye Round Roast Tender

There are three basic techniques you can use to make an eye of round roast come out tender.   These methods are:

Sous Vide is a method of cooking where you season the meat and vacuum seal it inside a food safe plastic bag.  You then place the bag inside a temperature controlled water bath at around 135F and let the meat “poach” until it is tender. You can usually find a sous vide cook set at Costco.

Most recipes for sous vide eye of round that I have read call for cooking the meat for 24 hours.  While I am sure that the 24 hour cook does result in an incredibly tender piece of meat I simply do not plan that far in advance for my meals.

The slow bake approach is pretty simple.  Season the roast, place it in a pan and then bake in a 225F oven for about two hours until an internal temperature of 135F is reached.  Remove the roast from the oven, allow to cool and slice very thinly across the grain.  This is very similar to how you would smoke an eye of round in a pellet grill to make some pretty amazing roast beef.

The last method of cooking a tender eye of round, braising, has many variations but the basic concept is to put it in a covered pot with some liquid and let it cook until the meat is “well done” and tender.  You can braise meat in a ditch oven or slow cooker but I prefer the ease and speed of an Instant Pot pressure cooker.

Quick Recipe for Instant Pot Eye of Round Beef Stew

Start by removing the fat cap from the roast and then cut everything into small cubes keeping the fat and meat separate.

Place the fat cubes into a heavy skillet or wok and cook over medium heat to render the fat.

While the fat is rendering season the meat cubes liberally with salt and pepper.

Remove the rendered fat pieces from the skillet leaving the melted fat behind.

Turn the heat to “High” and work in 2-3 batches as you sear the meat cubes on all sides (~5 minutes per batch). 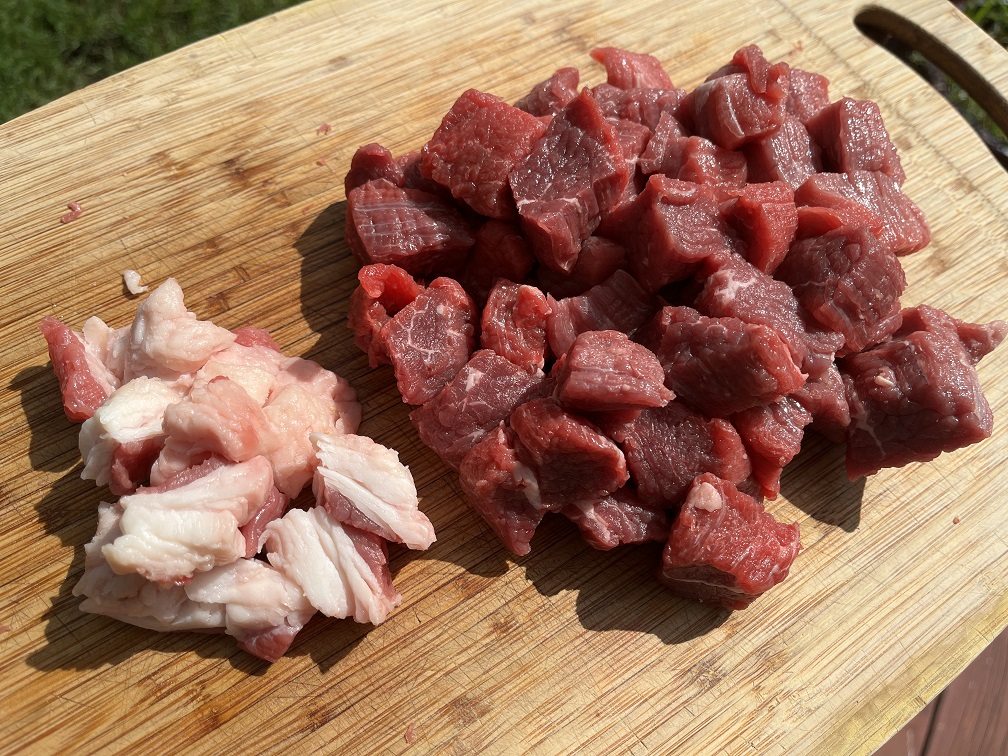 Assemble the rest of the ingredients for the stew.

I used a can of Golden Mushroom condensed soup along with onion, bell pepper, celery and Worcestershire sauce. This is not an “exact science” recipe and is really designed to use up a lot of the old veggies I had sitting in my refrigerator.

All of the veggies where sliced/chopped thin. 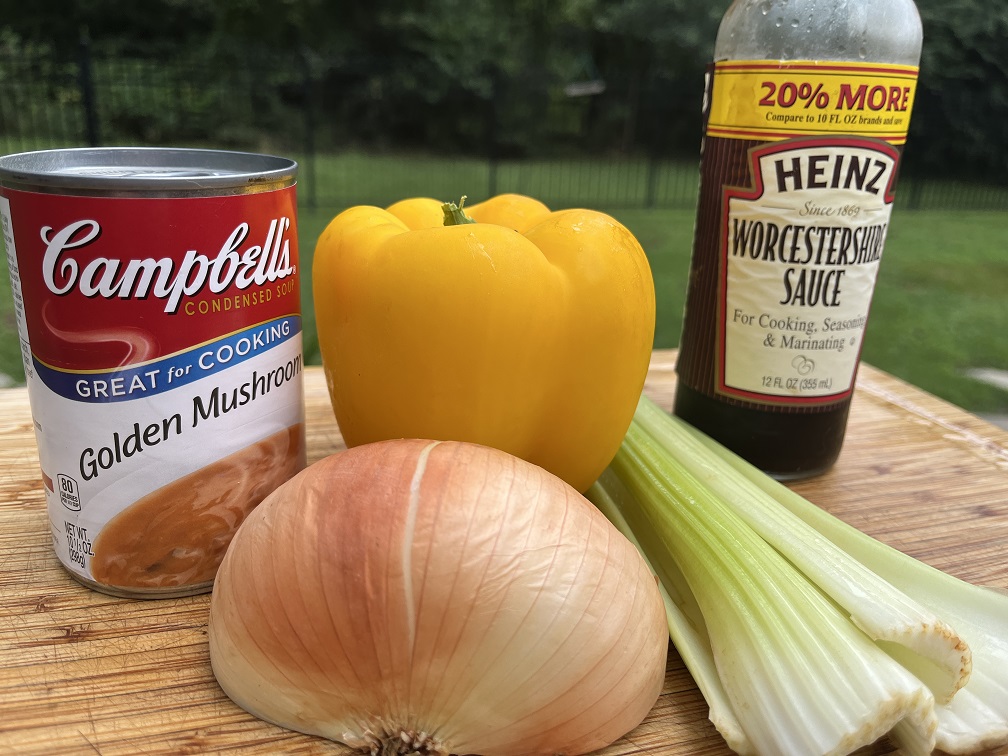 Add the browned beef, along with any pan drippings to the instant pot along with the soup mix, veggies, 1/4 cup of Worcestershire sauce and 1/4 cup of water.

Seal the lid on the pot, set to Meat/Stew and let the stew cook at pressure for 30 minutes.

After 30 minutes I prefer to let the pot sit for another 20 minutes in “Warm” mode to slowly lower the pressure. 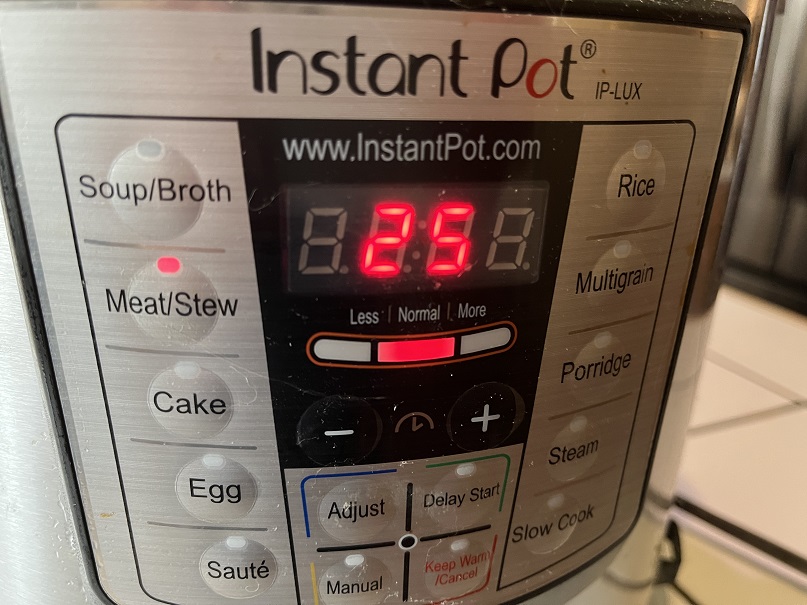 Ladle the beef stew into bowls and serve with a crusty bread (Trader Joe’s Ciabatta Rolls would be great!) for an easy, delicious and hearty meal that is ready in under an hour.

This is one of my favorite ways of cooking an eye roast because it is: 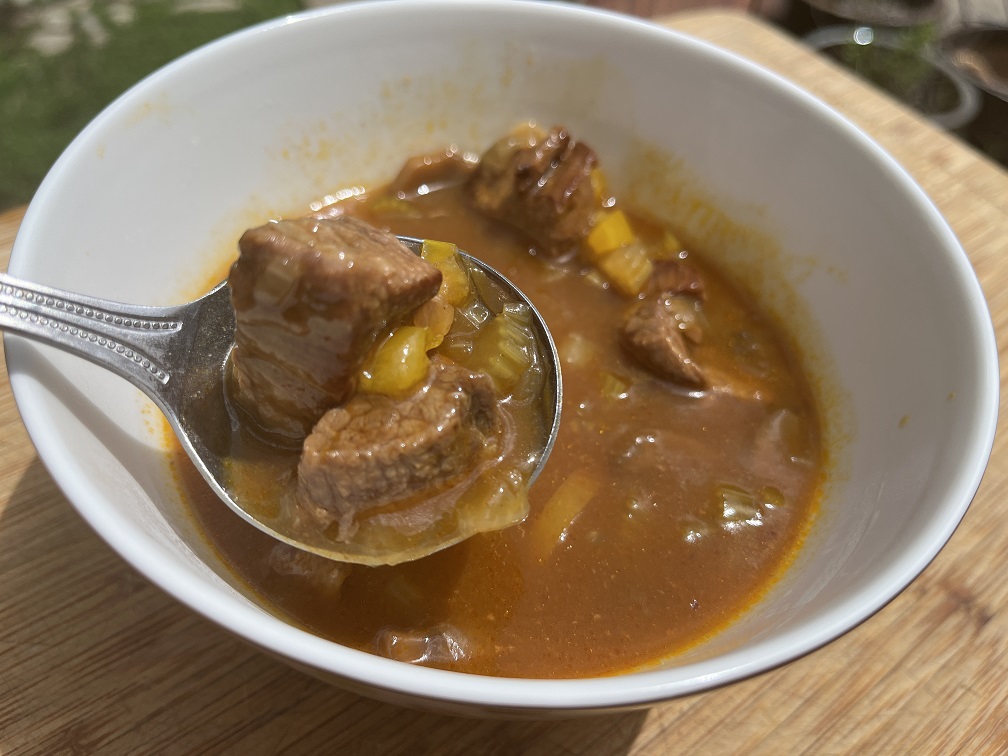