If you have a hankering for some gyros but don’t feel like dealing with bad service and high prices at your local Greek Restaurant then head down to Costco and pick up a bag of Daphne’s Beef and Lamb Gyro Slices! 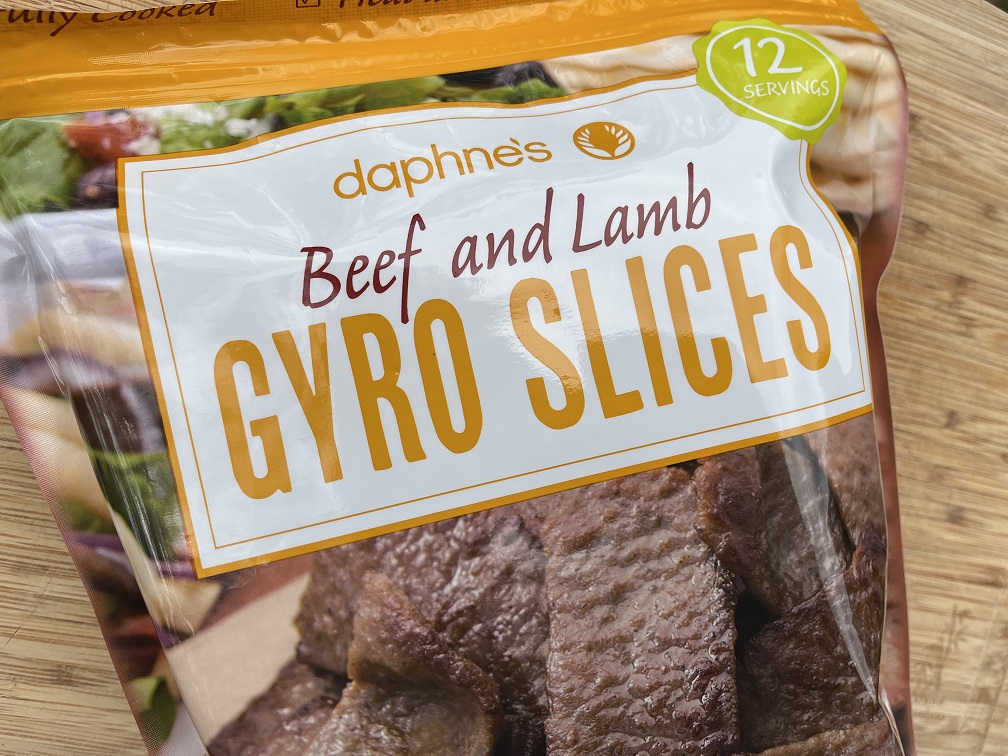 What Comes in the Package of Gyro Meat from Costco?

The package of gyro slices contains two plastic bags that each contain 0.75 lbs of sliced meat.

The meat, which is a combination of beef and lamb, is fully cooked and has a dull, gray appearance. The use of Beef and Lamb is typical of American Style gyros as the more traditional Greek product is usually made from pork and sometimes chicken.

The strips of meat are about one inch wide and three inches long. 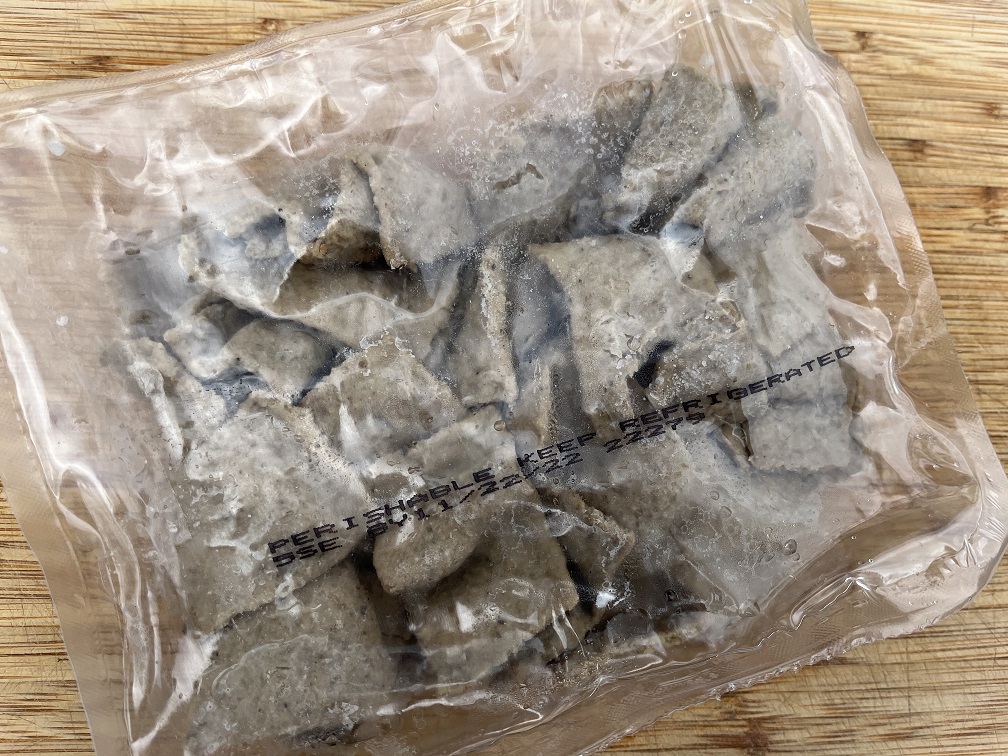 There is a layer of congealed fat on the bottom of the bag as it looks like the meat slices were sealed in immediately after being cooked.

The slices are not entirely made of meat as there are seasonings and binders used to add flavor and hold everything together.  Bread crumbs are one of the binders employed so this product is not gluten free. 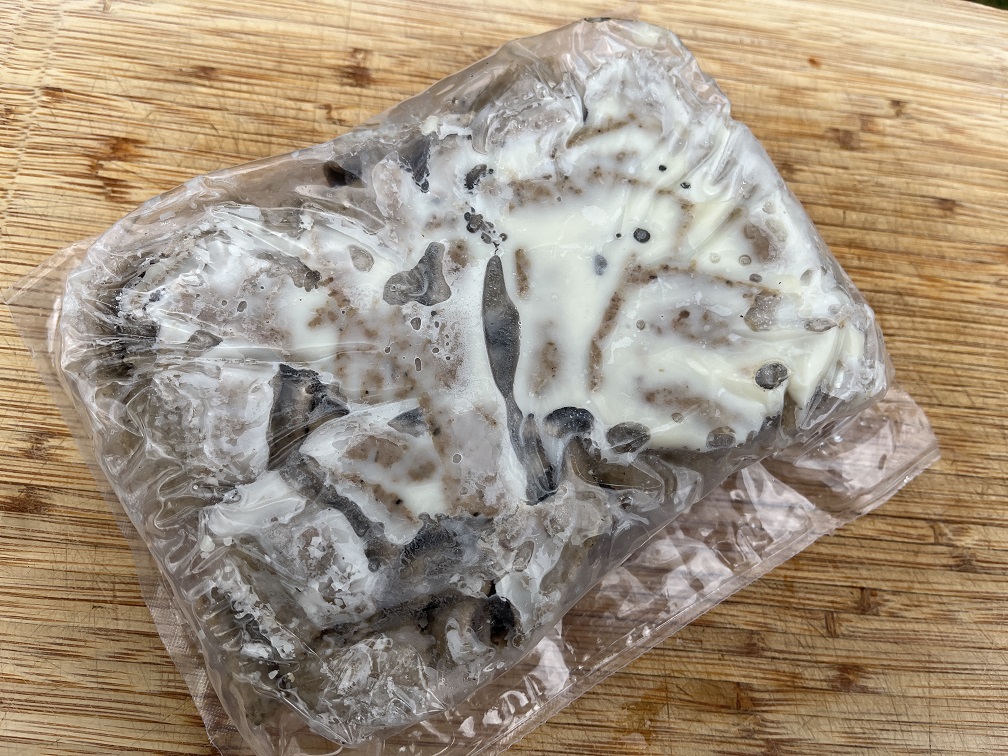 How to Heat the Gyro Meat

The heating instructions for the meat slices is providing on the packaging and simply state:

The meat is already fully cooked so all we are really doing is heating things up.  Because of that you might be tempted to just poke a few holes in the bag and toss it in the microwave for a few minutes but that would be a mistake for two reasons….. 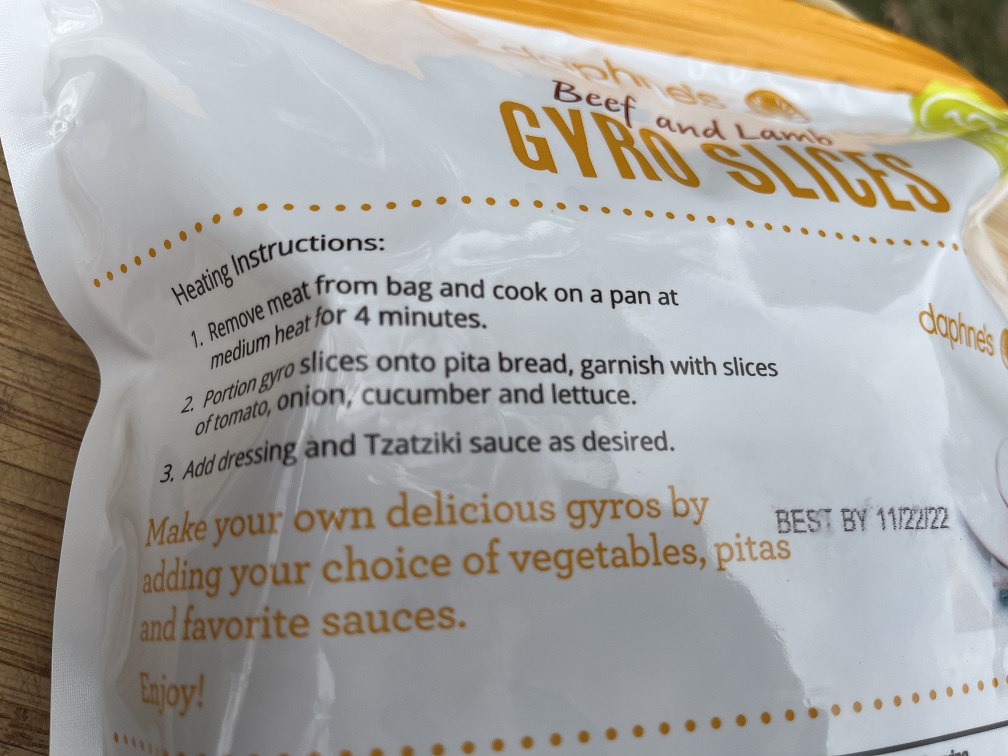 The first reason that you really want to heat the meat up in a skillet instead of a microwave is that the skillet will provide some browning and char to the otherwise grey looking meat.  This will add some color and crunch that you just wont get from a microwave.

The second reason that you don’t want to heat up the meat in the microwave is because it will be a massive pain in the neck to deal with all of the grease in the bag.  It is easy to drain off the grease (if desired) while pan heating but having a plastic bag full of grease out of the microwave is a mess waiting to happen. 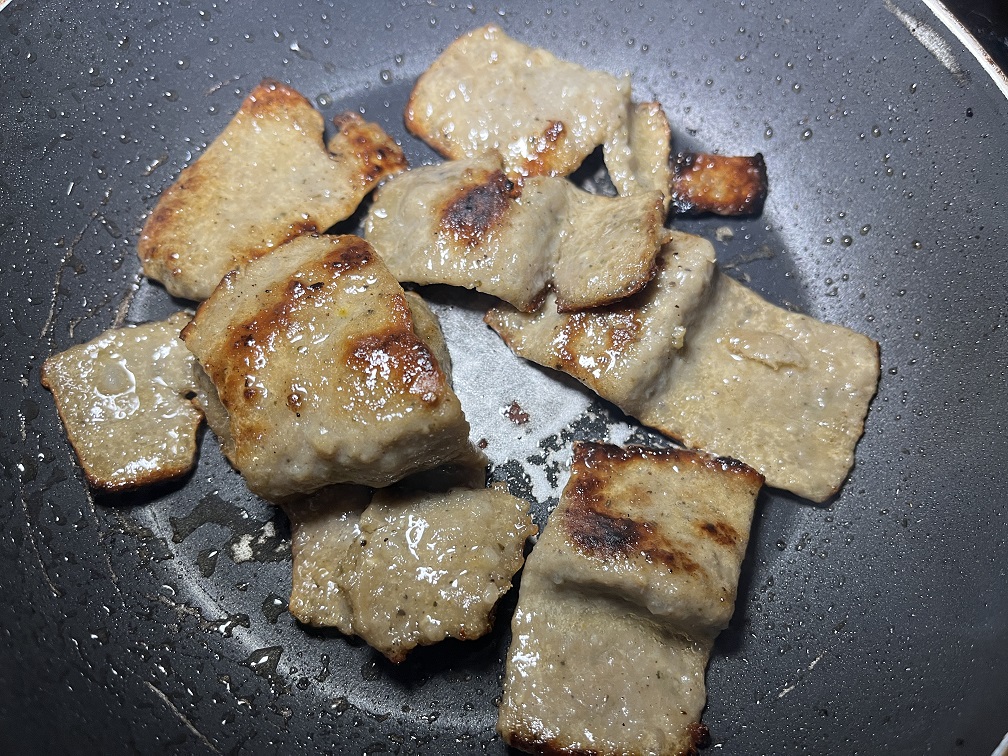 How to Serve the Gyro Meat

The classic way of serving the meat is to make a big platter of gyros!

Gyro’s are pretty straight forward to make.  Grab you some pita pockets, add some sliced cucumbers, tomatoes and onions along with the meat slices and top with tzatziki sauce.

Start by grating a cucumber until you have about 1/2 of a cup.  Lightly salt the sheds, let them site for a minute and then, using paper towels, squeeze as much water out of them as possible.

Stir the dewatered cucumber into 1 cup of Greek yogurt along with 1 tablespoon each of the following:

Season the sauce lightly with salt and pepper and let sit in the refrigerator for one hour to let the flavors come together. 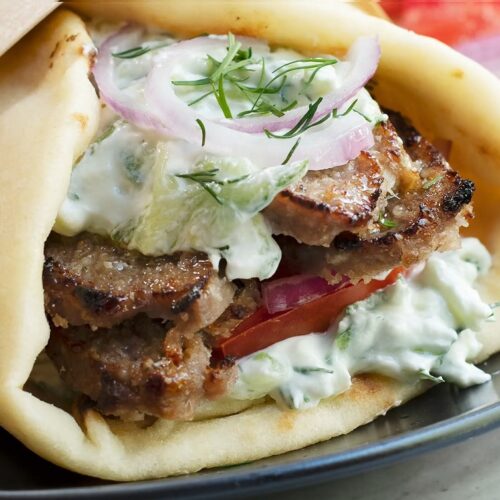 While making gyros is the obvious utilization for these meat strips I really like using them to add some flavorful protein to salads.

You can use the strips to top an Asian salad.  The unctuous of the lamb works surprisingly well with the crispy wonton strips and savory sesame dressing.

Another delightful combination is to use the meat with Costco’s Quinoa Salad. The Quinoa Salad comes loaded with cucumbers, tomatoes and lemon juice which mirrors many of the flavors you find in a traditional gyro. 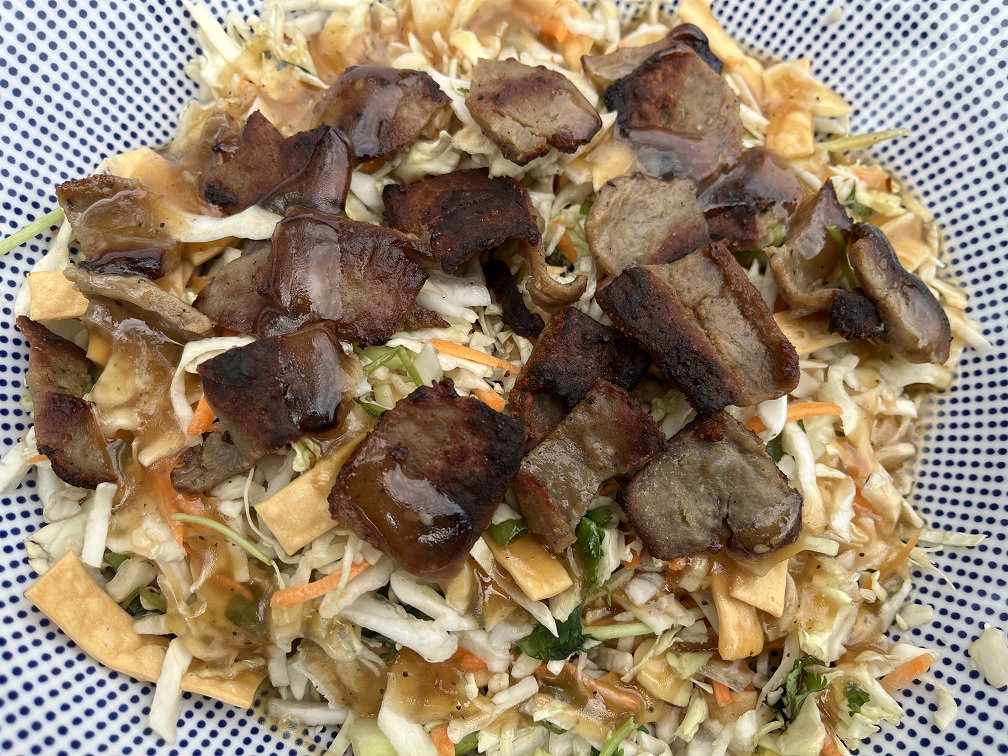 In my opinion the gyro meat at Costco is not particularly healthy.  I’m not saying that the meat is awful for you, just that you should not be eating a ton of it in a single sitting.

A single serving of the meat is 2 ounces (slightly less than a handful) and has the following calories and nutritional information:

What strikes me about the nutritional information is that while the fat and sodium are elevated the protein content is quite low.  A two ounce serving of chicken breast has about 17g of protein compared to the 7g present in the gyro meat.

What has me scratching my head is that the product is low in both protein AND carbs. So, based upon the carbs they haven’t filled the product up with breadcrumbs but, based upon the protein they are using a lot of something other than pure meat.  Maybe there is just a BUNCH of methylcellulose from the binder?? 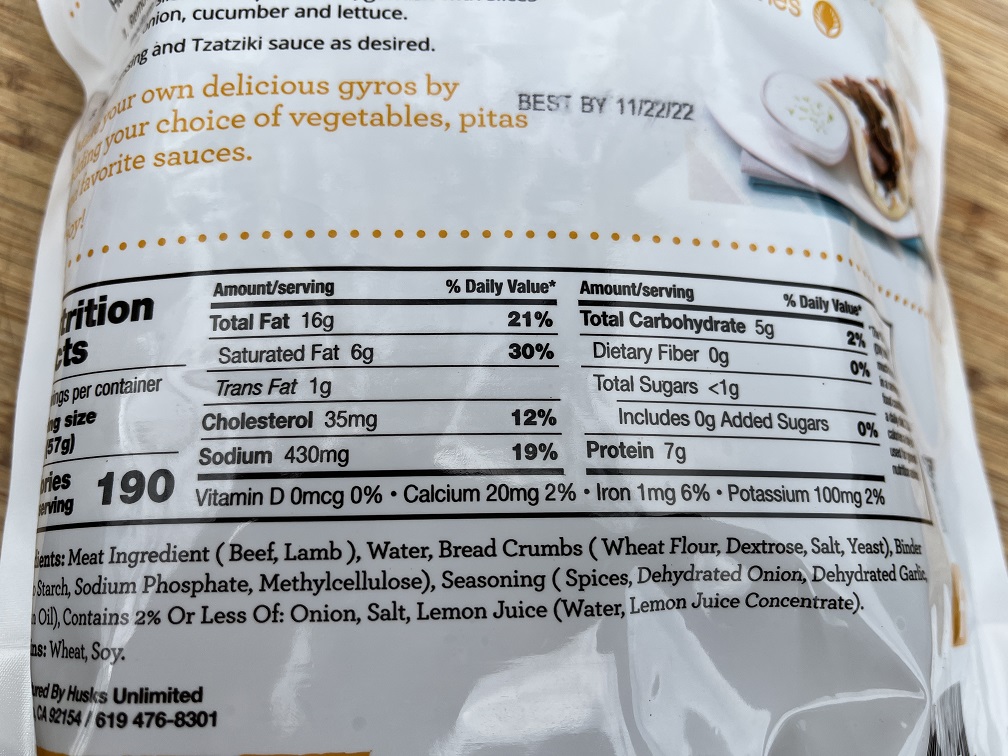 How Much Does Gyro Meat Cost at Costco?

Given that ground beef is averaging around $5 per pound these days, and lamb is even more expensive, this seems like a reasonable price considering that the product has been seasoned, cooked and packaged.

I was able to find a similar product, Beef and Lamb Gyro Slices from Midamarhalal for $10.99 a pound, which also makes the Costco product look like it is reasonably priced.

Another way of looking at the value proposition of this meat is that there are twelve servings per package which works out to a cost of $0.98 per serving.  If you make your own gyros at home then, after you figure n the cost of the pitas, veggies and tzatziki sauce, your gyros will probably end up costing you about $2.25 each to make. 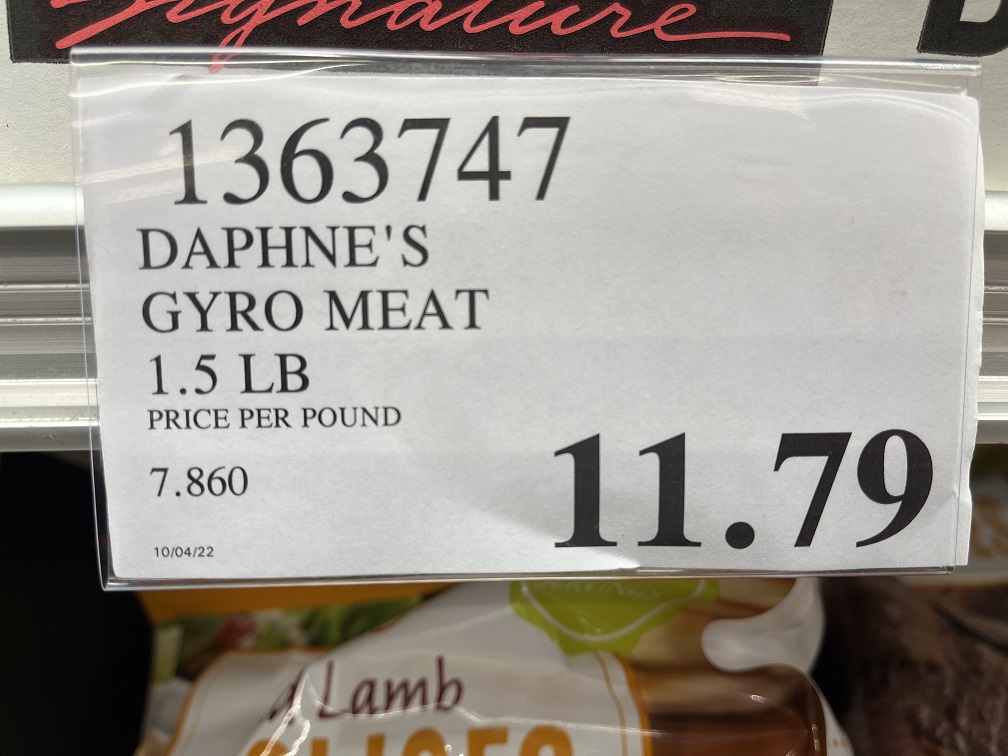 Daphne’s Beef and Lamb Gyro Slices at Costco taste great and are a somewhat authentic take on traditional gyro meat.

The meat is conveniently packaged, easy to prepare and quite versatile in a variety of meals.

The price for the gyro meat is very reasonable and will definitely save you a ton of money compared to going out to a Greek restaurant.