We use a lot of ice at our house and the ice maker on our refrigerator/freezer is not that great.  We have been keeping a spare eight pound bag of ice in our freezer because we are tired of running out of ice when friends come over.  Oh the joys of owning a Samsung!

When I spotted the Frigidaire Countertop Ice Maker at Costco I figured it might be the prefect solution for us! 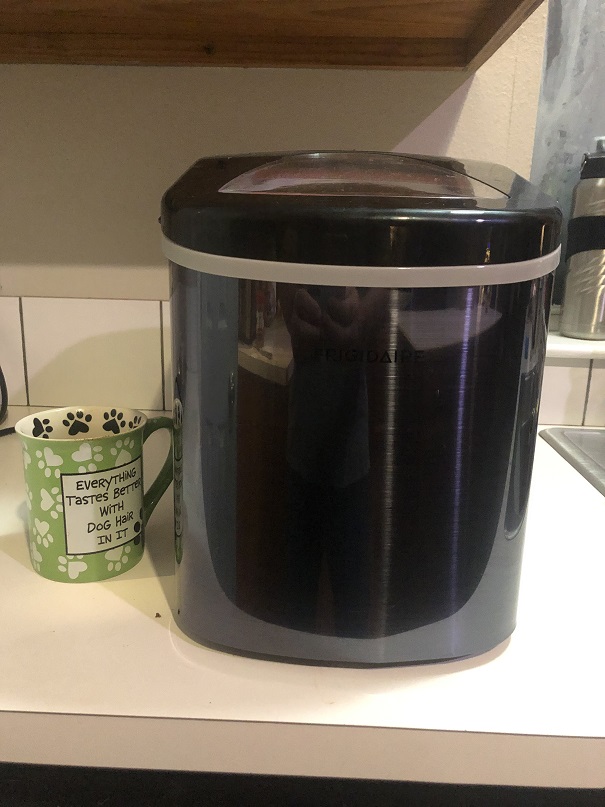 Keep reading and I’ll share my experience with this ice maker as well as the thoughts and comments of other people who have bought this incredibly popular product.

The important thing to know about this appliance is that the only thing it does is make ice.  That may seem obvious but many people make the assumption that it also serves as a freezer and that is not correct.

How the Unit Works

You fill the reservoir with water to the indicated fill line.  The unit holds just under a half gallon of water.

Turn the Power on and select whether you want Small or Large ice.  There isn’t much of a difference between the two sizes and I use Large. 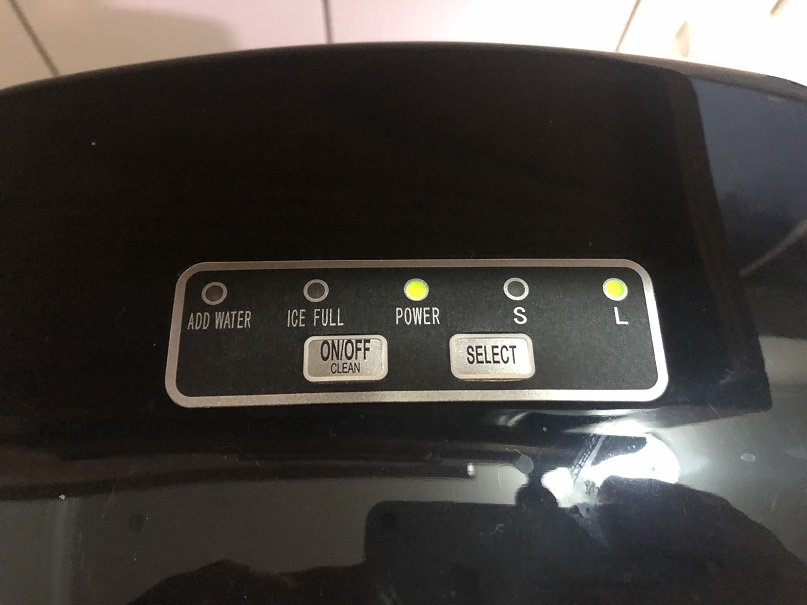 At this point the compressor turns on to chill a set of metal fingers while water is pumped over the chilled fingers to make ice.

In about six minutes the first batch of ice is ready and it gets dumped into the ice bucket in the front of the unit.  As soon as the ice gets dumped the unit starts on a second batch of ice.

The unit continues to make ice until a sensor measures when the ice bucket is full (it holds about two pounds of ice) and the unit stops ice production.

When ice is removed from the bucket the sensor turns the compressor back on and the unit starts making ice again. 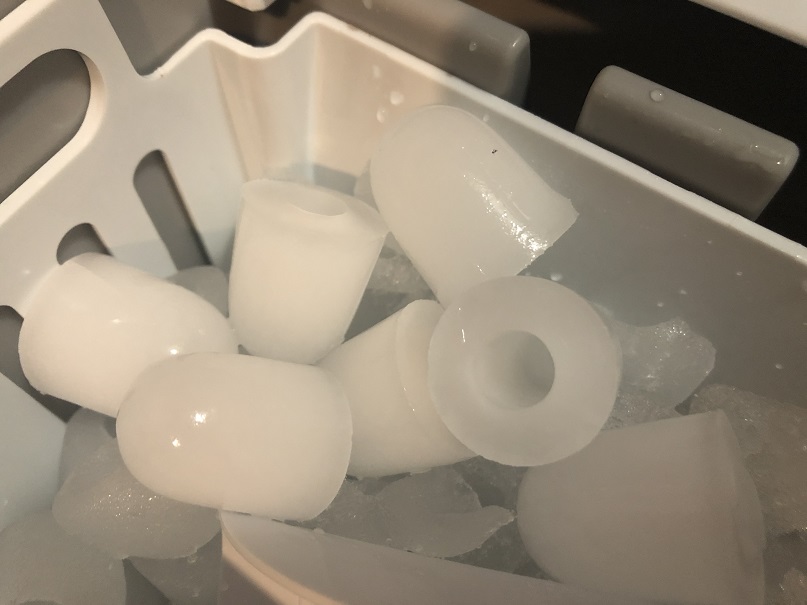 The icemaker has a stated capacity of 26 pounds of ice per day.  Please realize that in order for it to make that much ice you will need to remove the ice from the bucket as soon as it becomes filled and either use it or transfer it to your freezer so the next batch of ice van be produced. You will also need to refill the water reservoir six times.

This unit does not act like a freezer to save the ice that is produced.  If you just leave the ice in the icemaker then it will slowly melt and drip back into the water reservoir. After the ice melts the sensor determines the ice bucket is empty and the unit makes another batch of ice.

Something important that I missed when I bought and installed this unit is that because it has a refrigerated compressor the unit should NOT be turned at a 45 degree angle or larger.

Do not turn the box on its side or upside down or you might damage the compressor.

I didn’t pay any attention to how I had the box positioned when I brought it home but luckily we didn’t have any issues.

Frigidaire has an equivalent unit for sale on Amazon and it is extremely popular.  As of January, 2022 there were over 8,000 reviews so a LOT of folks have been buying this icemaker!

People bought these to use:

There were three main complaints about the icemaker:

The majority of the complaints were about units that stopped working after very little use.  One of the reviewers summed the issue up nicely when they stated that the icemaker was like a cat.  It did exactly what it wanted whenever it chose and did not care about what you asked it to do.

Issues ranged from the unit simply not making ice to the unit always indicating that it was out of water even when the reservoir was full.

I suspect that some of these issues were caused by the unit being shipped/handled upside down and damaging the compressor.

Customer service for the manufacturer (Curtis International) was repeatedly reported as being horrible.  Fortunately, returns are easy and customer service is great if you buy this from Costco.

Some of the complaints were about customers receiving the wrong product.

The Amazon listing, and the unit at Costco, indicates that the ice can be made in two different sizes.

Some Amazon customers were upset because they received an icemaker that could only make one size of ice.

If you want to drain the water from the reservoir (when storing or transporting) then you need to unscrew the drain on the bottom of the unit.

The problem is that the drain is hard to reach and turn without tipping the unit on its side and potentially damaging the compressor.

I bought the Frigidaire countertop icemaker at Costco for $89.99.

You can buy an equivalent Frigidaire unit from Walmart for $99 which means you will save 9% if you buy the icemaker at Costco. 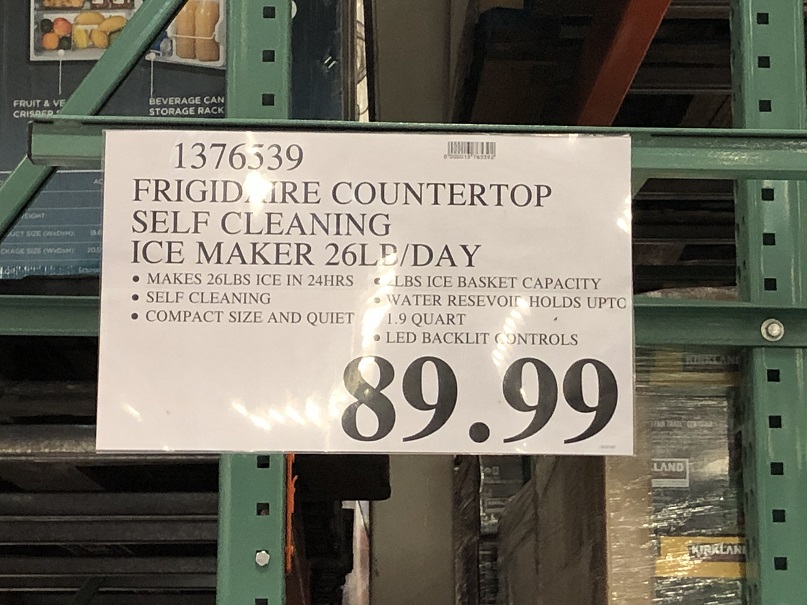 Overall Impressions of the Icemaker

To me, the word that best describes this icemaker is “Adorable”.

I like the ice that it produces and am a fan of the simple and elegant functionality.  It makes me happy when I hear the ice drop into the bucket!

This is not a heavy duty ice maker.  The icemaker is great for 1-2 people or as a supplement to a crappy Samsung refrigerator.