I spotted the Fender FA-125 Dreadnought Acoustic Guitar Bundle at Costco and the more I researched the bundle the more I liked it.  This bundle is not for everyone but will be absolutely perfect for a lot of folks. 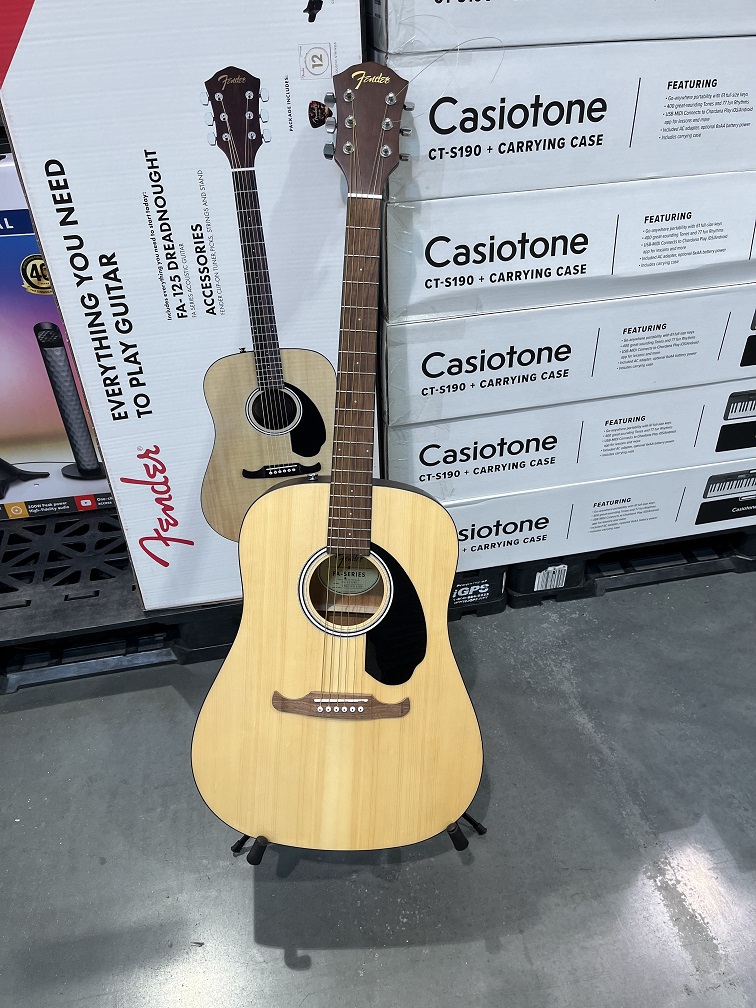 What Comes in the Fender Bundle?

The guitar lessons are delivered through Fender Play, an online platform available on your desktop or through an app.  The Fender Play program got an exceptional review from Guitar World, part of which is given below:

“Overall, as a tool to help people learn the fundamentals of an instrument, Fender Play does an exceptional job. The lessons are concise, comprehensive and fun. Thinking back to my early guitar education, I would have really benefited from having this option, especially in the early stages. And while it could benefit some advanced players who want to cover off gaps in their knowledge, ultimately it’s targeted at beginners – and it excels in this area.” 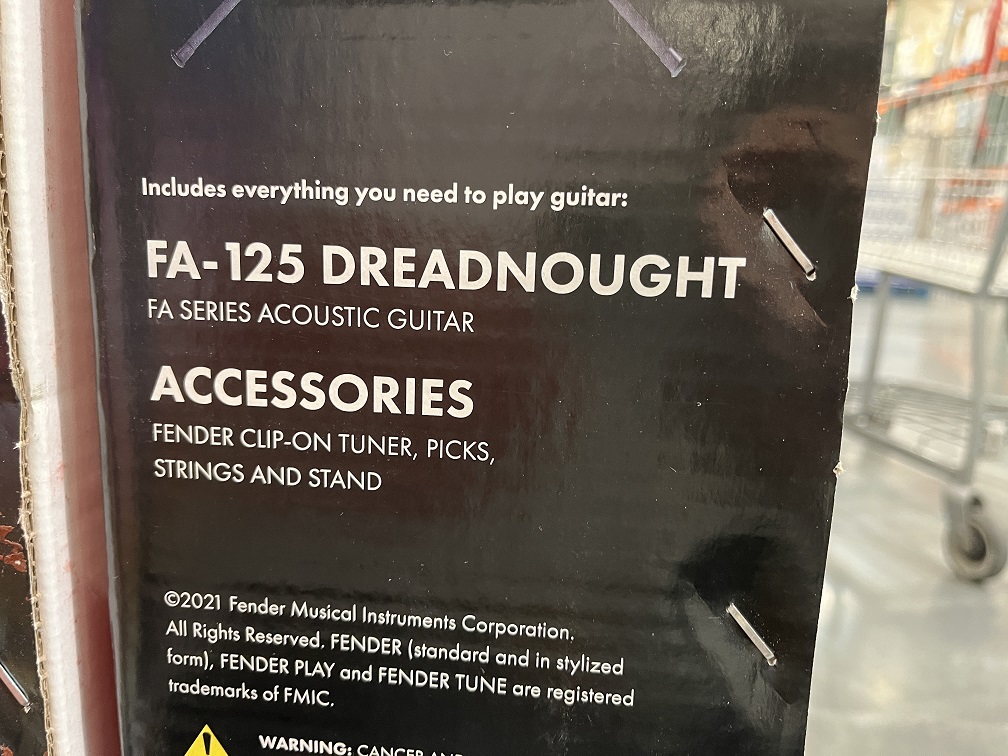 The FA-125 Dreadnaught, made in Indonesia, is described by Fender as:

“The FA-125 is a visually stunning guitar with a budget-friendly price. Quality laminate construction with a modern Fender 3 3 headstock and Viking bridge create an easy-playing instrument that sounds great. Beginners and developing players will appreciate this guitar, which features a nato neck that gives the guitar lively tone and a smooth playing feel.”

The Fender Bundle Perfect for These People

The Fender Bundle is perfect for two types of people:

The reason the guitar is perfect for these folks is because it is not an amazing guitar but it is good enough.

The combination of a nice guitar with a clip on tuner and three months of high quality online lessons makes this bundle perfect for anyone who wants to start learning how to play.

There is no need to pay around $1,000 for an amazing Gibson or Martin acoustic guitar when you are first starting out.  A beginner needs a guitar that sounds decent and is easy to play.

In fact, I would suggest a beginner should get a cheap guitar instead of an inexpensive one because they will be awkward and drop the guitar a few times and probably bang it into the wall a little as well.

And look at it from another angle…if you were to buy your kid a $1,000 guitar and they eventually decided that they didn’t like playing then chances are that you would get upset with them.  Don’t put that type of stress on your kid or yourself.  Get this inexpensive bundle and if they quit then no big deal.  If they discover they LOVE playing guitar then you can always buy them a better guitar for Christmas next year.

Decent Guitar for the Road

The other type of person who would really enjoy this guitar is an experienced player who is looking for something to play at gigs, parties, camping trips, etc.

An experienced player will usually have one or two guitars at home that sound amazing and are pretty expensive.  The problem is, once you start taking your guitar to gigs and parties they can get beat up.  Someone might spill a beer on you, step on the instrument or, in the worse case, actually steal the guitar.

It would be crushing if your favorite $1,000 Gibson got stolen out of your car but no big deal if someone takes your $175 Fender.

An experienced player will not get the full benefit of the bundle as the $45 worth of Fender Play lessons are really aimed at beginners. However the guitar is fairly priced and the tuner and extra strings will definitely get used. 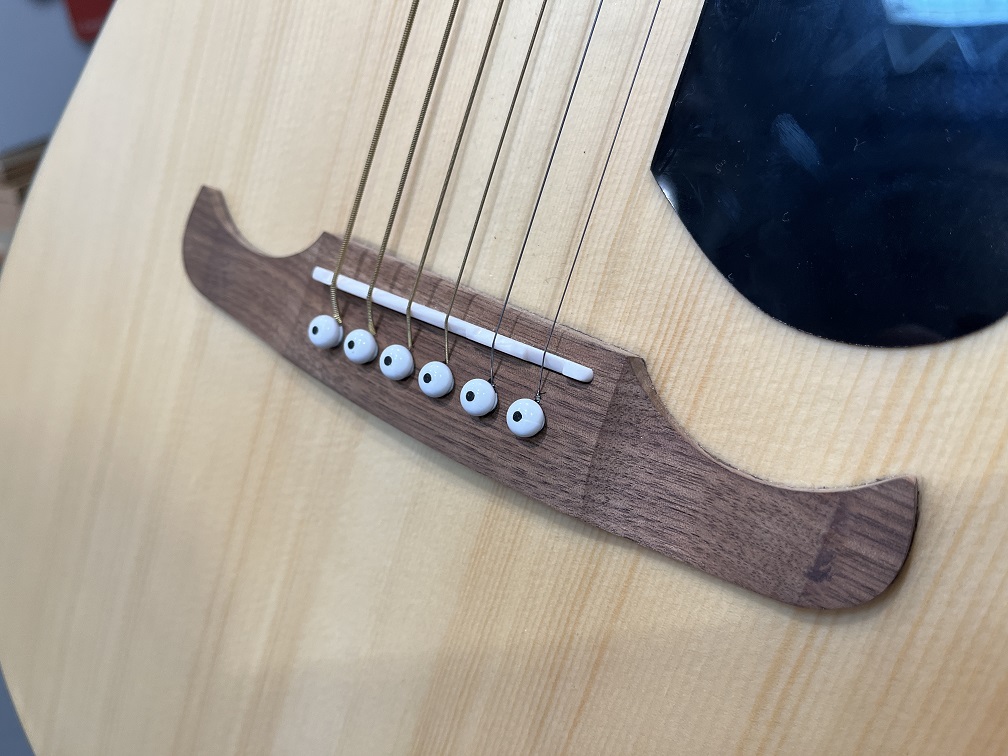 Fender is selling a very similar bundle on Amazon with the only difference I can tell being that the Amazon bundle has a gig bag instead of a stand.

I looked at the customer reviews for the Fender Bundle on Amazon and saw that just under 1,800 reviews had been left which is a pretty nice data set to work with.

When you combine the 5 and 4 Star reviews the bundle has a 92% Customer Satisfaction rating.

Some of the representative positive customer reviews are given below:

My son loves this guitar and started playing it as soon as he got it. It is great quality for a great price. The company is very professional as well. I would recommend this guitar to anyone interested.

Ordered for my 17 year old daughter who mentioned she was interested in learning to play. Didn’t want to spend too much in case she decided it wasn’t for her. Received a beautiful guitar that sounds wonderful.

This guitar is a good quality guitar! The wood is nice and solid, the sound quality is awesome it’s a nice bright sound. This would be a great guitar to start or continue playing with! I would highly recommend this kit to anyone wanting to play.

There were only a few negative comments and they fell into three general categories:

Overall I think the customer reviews for the bundle make it look like a solid purchase.

Price of the Fender Bundle Cost at Costco

The Fender bundle currently costs $179 at Costco and this is a nice deal from several standpoints.

If you were to buy the similar bundle from Amazon then it would cost you about $30 more.

If you were to buy the bundle pieces directly from Fender it would cost you the following:

The Costco Bundle will save you about $125 over buying the individual components directly from Fender. 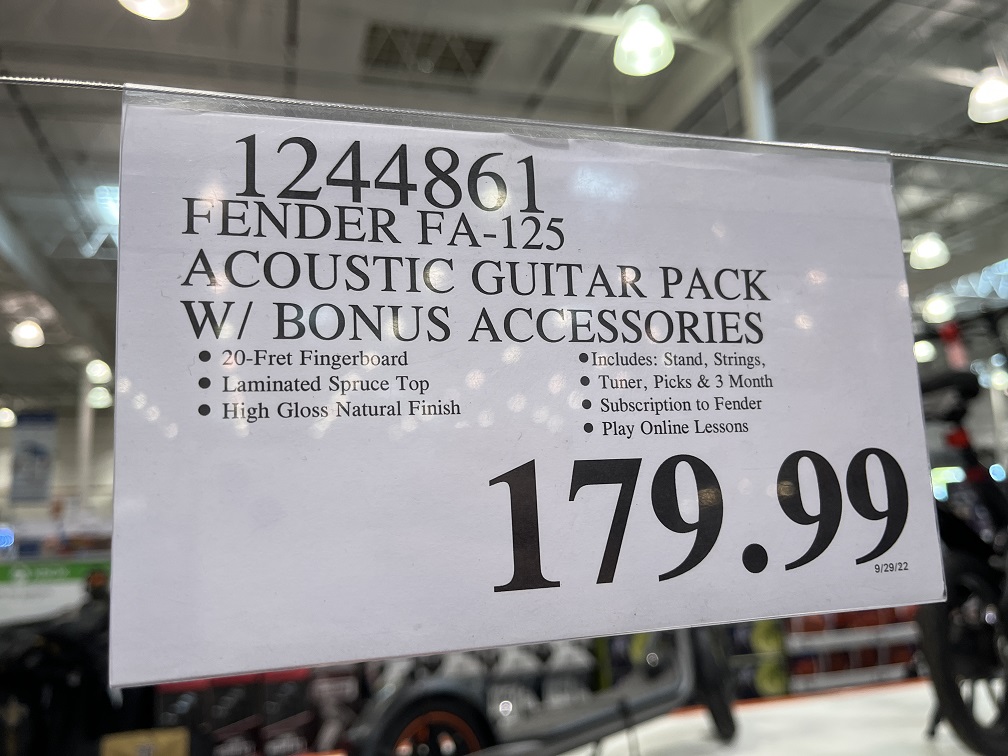