I have been wanting to fire up my grill for a while and when I saw that Costco had Top Sirloin Cap roasts for sale I knew the time had come!  It is not common to find this cut of beef for sale at Costco so I took advantage of the opportunity and bought the twin pack.

Keep reading and learn what this cut of beef is, why it is considered special and how I like to cook it. 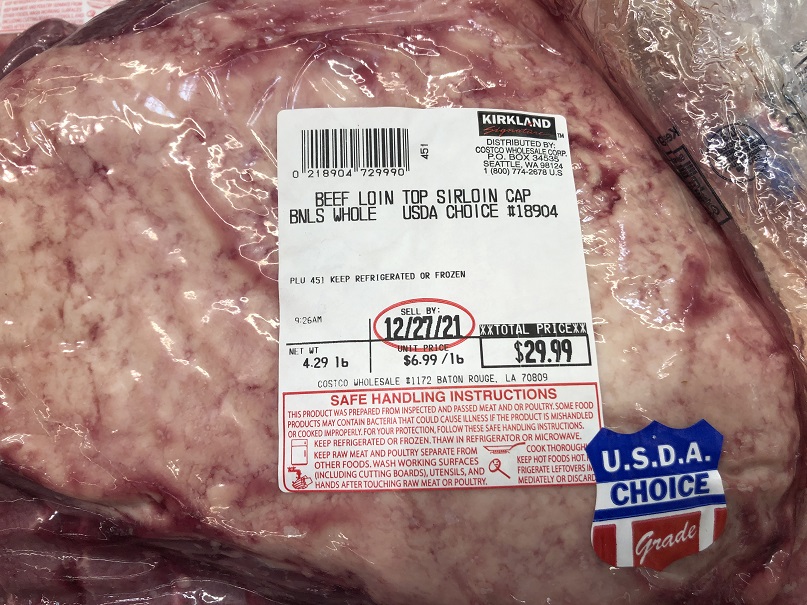 What is a Whole Top Sirloin Cap?

This cut comes from the Sirloin Primal.

The “Whole” part of the name reflects that this is the whole muscle and has not been trimmed or sliced into steaks.

The “Top” part of the name refers tp the fact that this muscle is located on the very top of the Sirloin primal.

The “Cap” part of the name refers to the thick fat cap that is on the top of the muscle.

Once you get past the fat cap, this cut of beef is like a regular sirloin steak.  In general, these cuts are extremely lean with very little marbling.  The flavor profile is quite beefy and the meat is about “medium” on the tenderness scale. 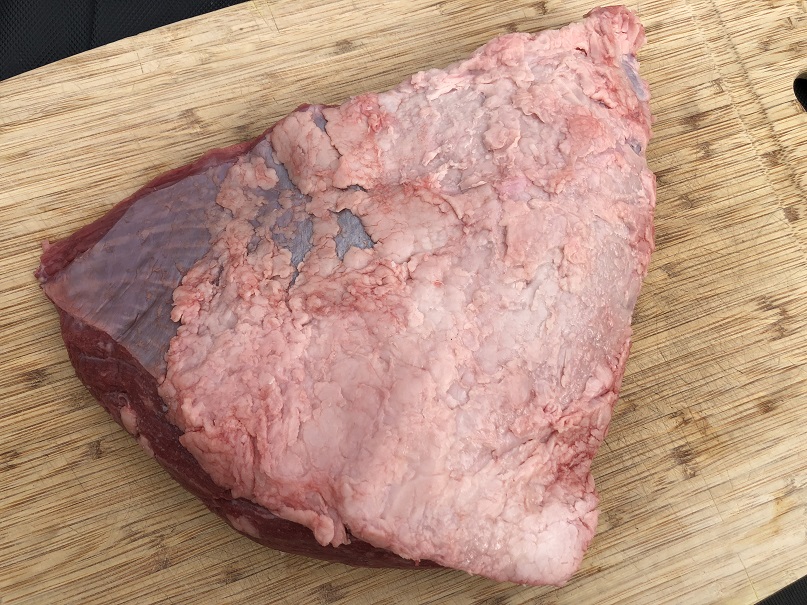 The Top Sirloin Cap is Popular

The Top Sirloin Cap is quite a famous cut, especially when sliced into individual steaks.

In South America this cut is called “Picanha” and is the national steak of Brazil.  If you have been to a Brazilian steak house then you have  seen this steak served from giant metal skewers.

The Top Sirloin Cap is also called a “Coulotte” in some parts of the world and the “Rump Cap” in other parts.

This cut is popular for several reasons.  When you grill the steaks over an open fire the dripping fat catches fire and produces a wonderful smoke aroma that infuses the beef with even more flavor. The combination of lean beef with succulent fat is a combination that many people love!

The picanha is also popular because it is extremely affordable.  The Top Sirloin Cap was the least expensive steak available at Costco when I bought these. Costco was selling this picanha for $6.99 per pound while at the same time selling tri tip for $12 per pound and ribeyes for $19 per pound. 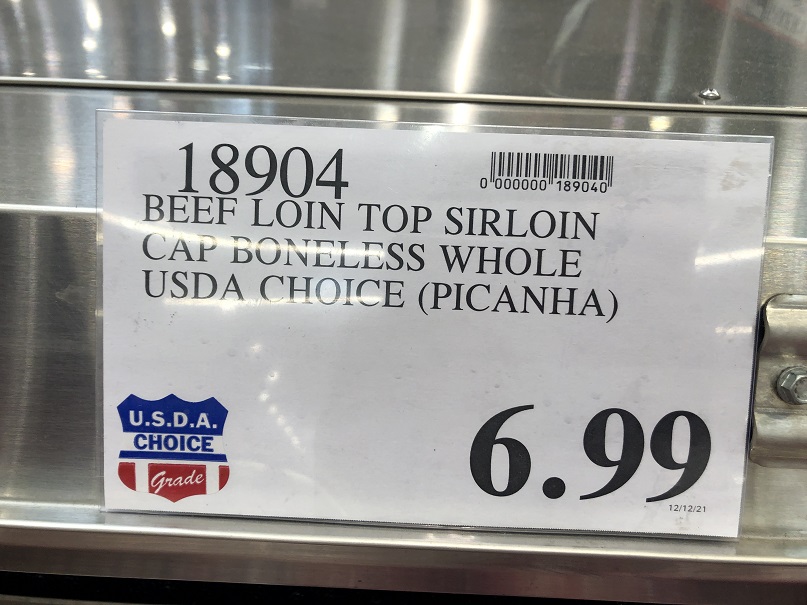 I am going to show you how I cook this cut on a pellet grill and after that will share an alternative technique for cooking it in the oven.

They way I cook picanha would make a Brazilian cry because I start by cutting off the fat cap.  I get rid of the fat layer for three reasons:

I am not trying to avoid the fat when it slice it off.  What I am really doing is getting rid of the layer of silverskin that is located between the fat and the meat.

The silverskin does not get tender when the picanha is cooked and makes every slice be a little chewy.

I hate the sliverskin more than I love the fat.

I smoke the picanha in my pellet grill which has a grease tray that directs all of the rendered fat into a collection bucket under the grill.

I am a little lazy about taking the time to properly clean my smoker so I take steps up front to keep it as clean as possible.  The less fat that goes into my pellet grill in teh first place means less grease and mess for me to deal with later.

Because the grease tray directs and dripping fat to a collection bucket, picanha cooked in a pellet grill will never benefit from the delicious charred flavor created when the rendered fat bursts into flames over an open fire.

I figured that since I won’t get one of the major benefits of cooking the picanha with the fat cap then there is even less of a reason to keep it on.

Cook to an Internal Temperature of 130F

Once I remove the fat cap I season the roast on all sides with Traeger’s Chili Garlic Dry Rub dry rub that has salt, pepper, garlic, onion, paprika and chili powder.  You could go as simple as just salt and pepper and it would still be delicious.

The picanha gets cooked at 250F for an hour or until it reaches an internal temperature of 130F.  Once it reaches 130F I remove it from the pellet grill, let it rest for 10 minutes and then slice thin against the grain. 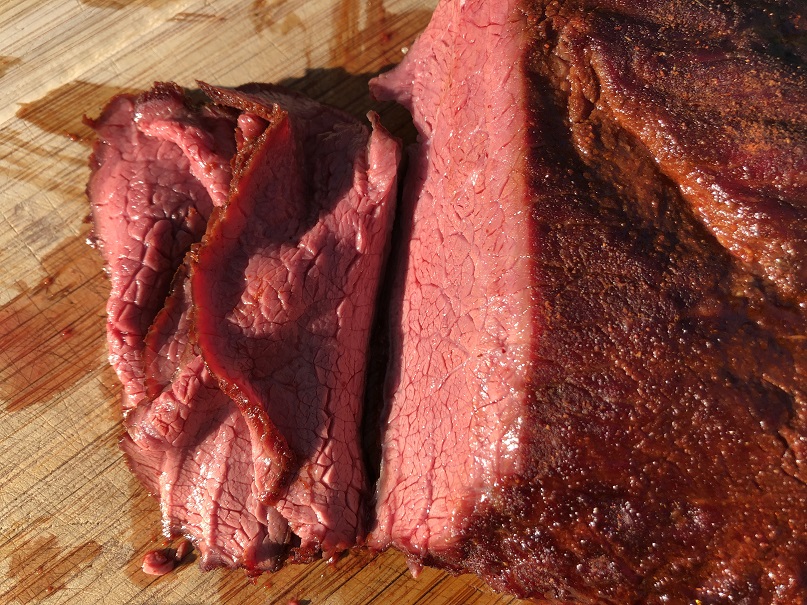 You can serve the steak in a thousand different ways.

One of my favorite ways of enjoying the steak is as a simple sandwich.  I load up a sweet King’s Hawaiian mini-sub roll with lettuce, tomato, steak and a spicy barbecue sauce and the resulting sandwich is amazing! 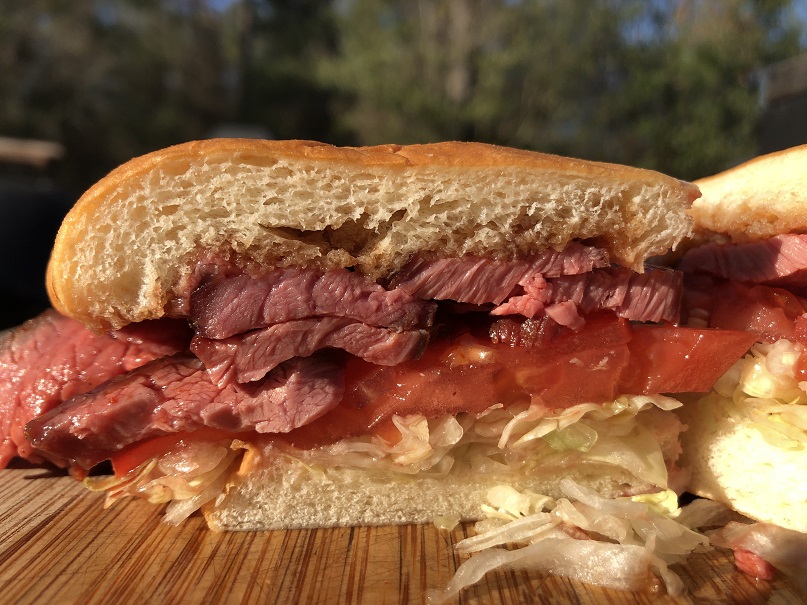 Cooking Picanha in the Oven

If you would like to see how to cook this cut in an oven then here is a link to a nice recipe from Food Network to get you started.

The video below is also an excellent (and short) demonstration of cooking this cut in a oven.  The chef starts by rendering the fat cap in a pan, basting the meat on the stovetop and then transfers the roast to a 250F oven for ten minutes.

The chef does an excellent job of showing how and why to slice this roast across the grain.