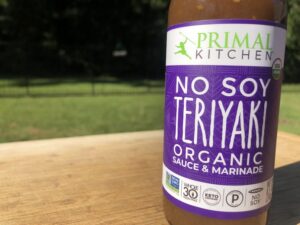 Product Description: A teriyaki sauce made with coconut aminos instead of soy sauce.

A Great Sauce but a Poor Marinade

The product is a wonderful dipping sauce for grilled chicken but did not impart much flavor when used as a marinade.  I suspect the low sodium content prevents the teriyaki from fully penetrating the meat when using the sauce as a marinade.

Does not perform well as a marinade.

The No Soy Teriyaki Sauce and Marinade from Primal Kitchen is an interesting product that grabbed my attention.

I like the Primal Kitchen products because they are usually full of flavor and are not packed with salt and high fructose corn syrup like many processed foods.

So, I figured if these guys had come up with a tasty teriyaki sauce then I needed to give it a try! 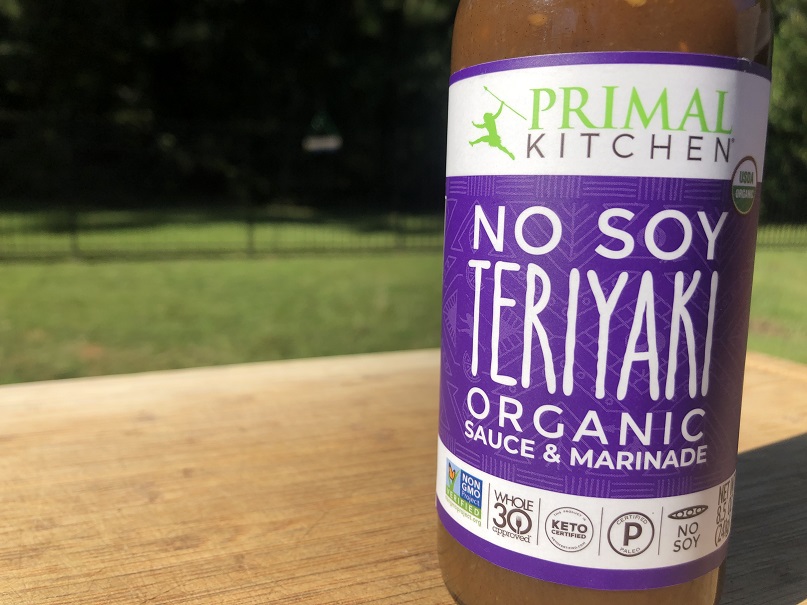 One of the big selling points for this teriyaki sauce is that it does not contain soy.  Personally, I do not care if a product has soy or not so I am going to set that feature aside and just focus on the flavor and other product features in this review.

Let’s take a closer look at the nutrition facts, ingredients and labelling of this teriyaki sauce.

Primal Kitchen defines one serving of the teriyaki sauce as one tablespoon.  Each tablespoon of sauce provides the following nutrition:

The teriyaki has nutritional values (low carbs, reasonable salt levels) that are consistent with what you should expect from Primal Kitchen products. 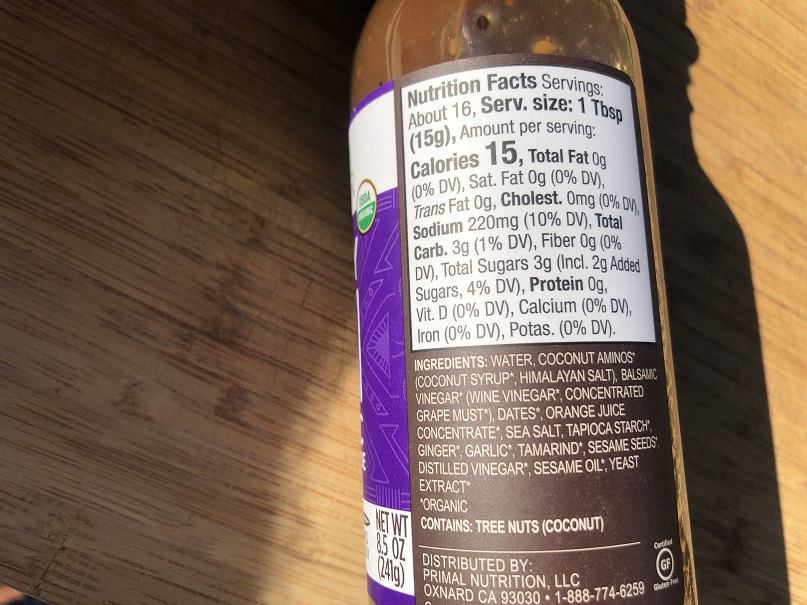 The No Soy Teriyaki has the following ingredients:

Apparently the coconut aminos replace the soy sauce that is typically used to make teriyaki sauce.

According to Healthline, coconut aminos are made from the fermented sap of coconut palm and sea salt.  Coconut aminos have a similar, but milder, flavor as soy sauce and are naturally lower in sodium.

Certifications listed on the No Soy Teriyaki label include:

I am surprised that the product does not have a Vegetarian certification as I do not see anything in the ingredients that would disqualify it from that category.

How Does the No Soy Teriyaki Sauce Taste?

Primal Kitchen states that this is a Full Flavor Sweet and Sour Sauce and Marinade that is great on chicken and veggies.

I tested the teriyaki both as a marinade and a sauce and came away with mixed results.

Using the Teriyaki as a Marinade

My first use of the teriyaki was to marinate a one pound boneless, skinless chicken breast that had been thin sliced into cutlets.

I added the chicken to a dish, poured on enough of the teriyaki to complete cover, and let the chicken marinade in the refrigerator for three hours.

After the chicken marinated it was grilled over direct high heat for about 4 minutes per side. 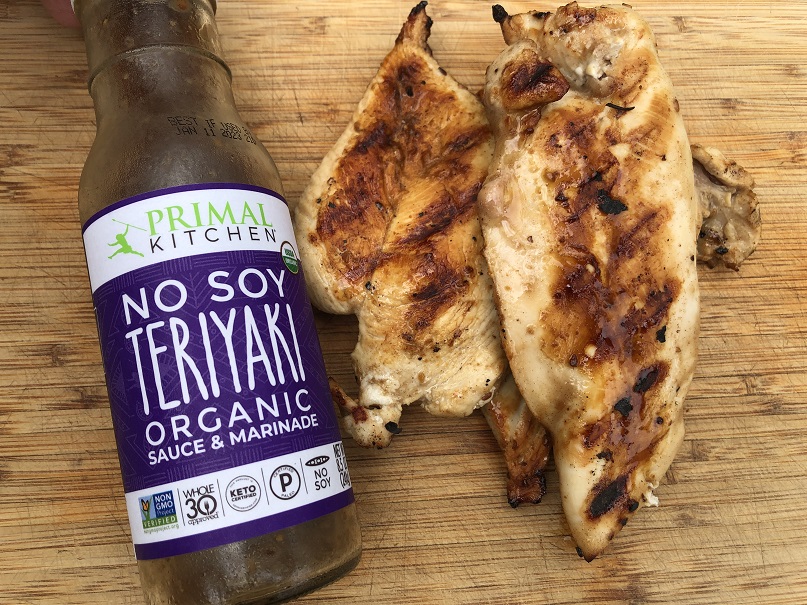 My observations on using the teriyaki as a marinade were:

The Primal Kitchen teriyaki comes in an 8.5 ounce bottle and costs $7.99.  This is not a lot of sauce and the price is expensive.  I was not crazy about the fact that I had to use half the bottle to marinate the chicken.  Something is not right when the marinade costs the same as the meat.

I was disappointed with how little teriyaki flavor was in the grilled chicken breasts. Three hours is plenty of time to let a piece of chicken marinade and I was expecting a bigger flavor punch than what I got.

Bottom Line: I will not be using the No Soy Teriyaki as a marinade again.  The cost/flavor balance is too far out of whack.

Using the Teriyaki as a Sauce

After I sliced up and tasted the grilled chicken breasts I poured on some teriyaki sauce and was absolutely delighted with the flavor.

When I simply used the teriyaki as a dipping sauce I could not have been happier.  The teriyaki and grilled chicken tasted amazing together and I will highly recommend the combination!

I used the sauced and sliced chicken to top a green salad and it was a spectacular meal that was low in salt, fat, and carbohydrates.  This is exactly what I expected from a Primal Kitchen product.

My next try with the teriyaki sauce was using it as a dipping sauce for some crispy vegetable eggrolls.

My wife and I were both a little underwhelmed with how the sauce worked with the veggies.  For lack of a better word the sauce tasted “thin” and couldn’t stand toe to toe with the eggrolls.

We ended up doctoring the sauce up by adding a little bit of sweet and little heat.

I am not going to fault the sauce here because this could very well just be a difference in personal tastes.  If nothing else, the teriyaki makes a great starting point for your own personal sauce creation! 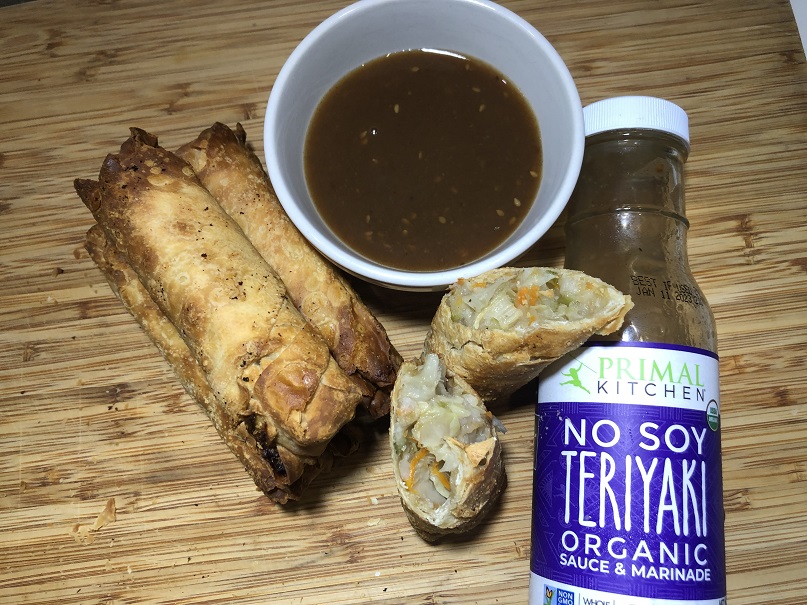 Bibigo Mandu Pork and Vegetable Dumplings {Not Our Favorite}